A few months ago I planted some cosmos seeds and waited anxiously for them to bloom. For the past few weeks, several buds have been blooming. It's a good time for me to spend more time with the blooms and not in a hurry mode to take photos of them. Since they are mine, I own my time with them. It's also a nice time to practice some techniques in photography. So here are some of the results of my photography exercise:

Cosmos with our dirty,old wall as background: 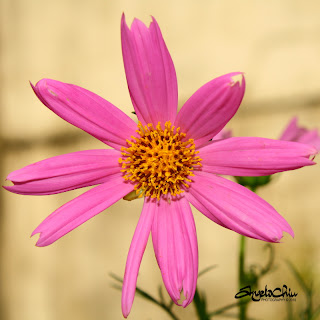 Cosmos with the shade of the trees as background: 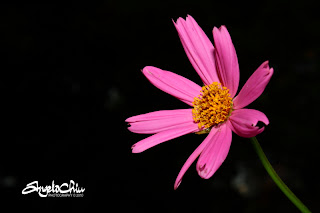 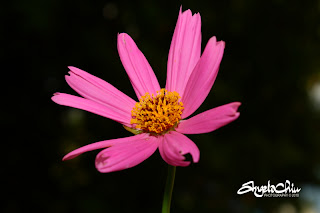 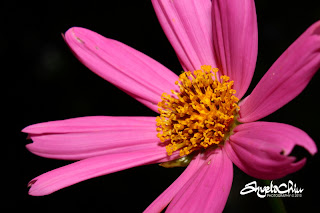 Aren't my cosmos flowers a beauty?

As I said, this was also an exercise. All of these were taken around nine in the morning. So the sun was already high but with some occasional patches of clouds. The first photo shows how bright it can be. How come the last three photos have a background almost black. This was intentional so I can isolate the bloom and color. I wanted the cosmos flowers to be the highlight. I used the shade the trees provided on the background and I  set my camera with a small aperture (large f number), high shutter speed, low ISO. Isn't a small aperture, high shutter speed, and low ISO a recipe for a dark photo. Yes it is! Well that's what I wanted for my background, right?

How about the subject? How was I able to get a nice pink photo of a cosmos flower? Armed with the recipe above, I added some fill-flash. Yes, I used flash in broad daylight. In this exercise, I used my pop-up flash for the fill flash. It was a matter of adjusting how much flash should be used with the recipe of a dark photo. Well, I had some several test shots before I got the result I wanted. Viola!

By the way, the first photo was also produced with fill flash as the cosmos flowers where shaded by a tree behind me but the wall was very well lit by the morning sun.

I also learned here to change my composition and be aware of the background. I would instantly take a photo  of this like the first photo as I did. If you would see, there's a black/dark line running through in the background. So, I forced myself to take another angle/view and that's where I got the dark background and make the cosmos flower pop!