Recently my wife and my kids gave me a new pair of shoes for Father's Day. Anything new is a good opportunity for some product shots as the subjects are still in their best condition. It is also a good chance to try something new, experiment with some stuff, and practice photography.

Thank you to them for fueling me with these.

So what is this something new and some stuff? They are, as the title suggest, flash gels. This can be used to add or change color of your backgrounds especially if you have a white background. For this quick project, I've decided to use a green gel for the background but didn't have any green gel. I have an orange gel which was a DIY flash gel I made several years ago when I started experimenting with flash. So I went the DIY route for the green flash gel also. As these gels are intended for adding color to the background, I wasn't very particular to the hue of the color. 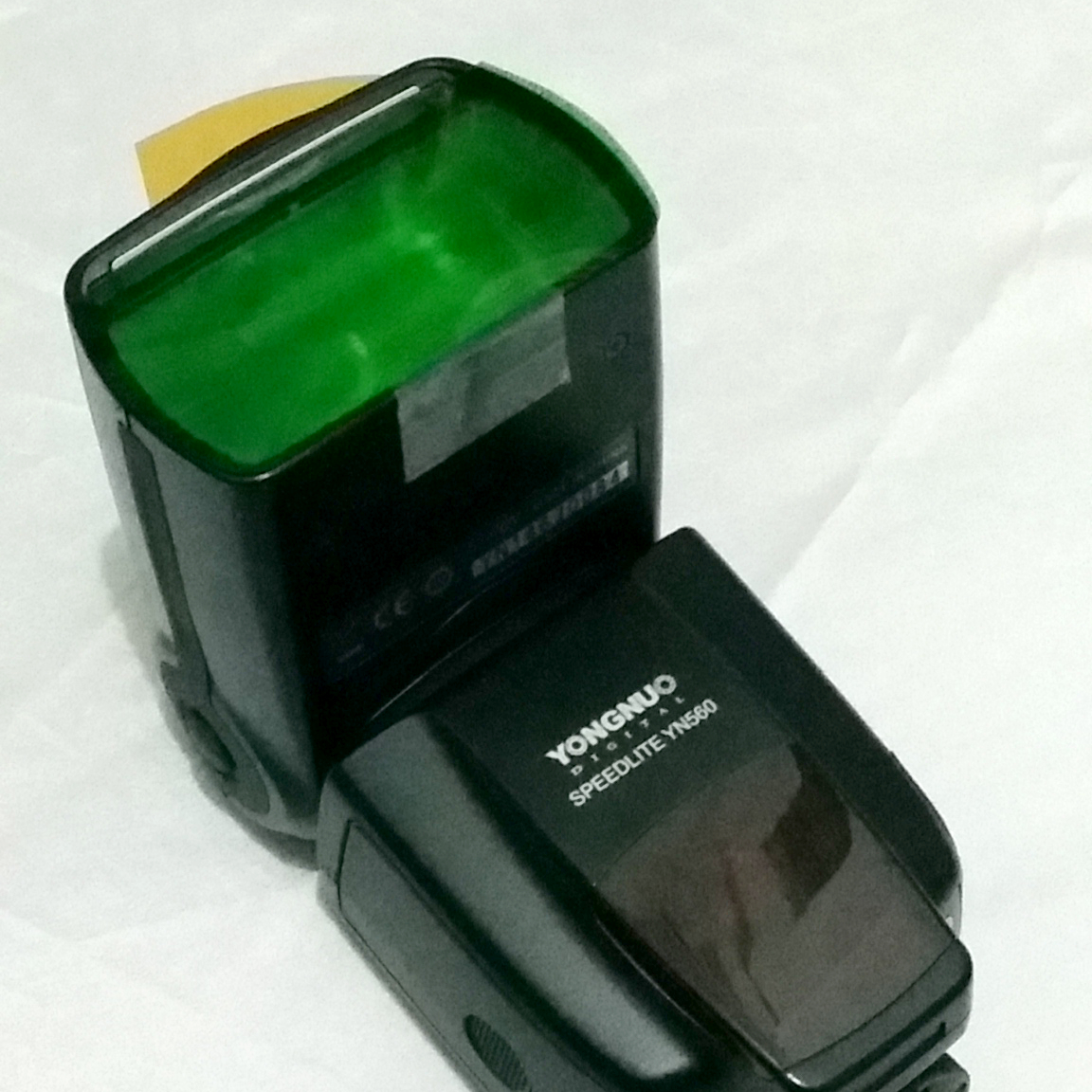 I created these gels from printing the color I intend to have on an inkjet-printable acetate that is used for overhead projector (OHP) presentations before Powerpoint presentations arrived.

As the image shown on the left, the orange and green have been cut to the size of the flash head. I do this so if I intend to use a diffuser cup or other light modifier with this gel I can do so with ease. As I have other DIY stuff for my flash, I have considered how to adapt them to one another. The blue and purple have not been cut yet as I don't have the need for them as of the moment.

Also on the left will be the image how it is attached to the flash head. It is held by the small flap by built-in diffuser then taped below.

The orange gel is kept on top of the flash head as seen also in the image. That is where my gels are stored -- together with the flash unit, taped and ready for the next use.

Now that I have my green gel printed, cut, and taped. It was time to shoot the new shoes. On this project as well, I used another DIY light modifier called a grid. Basically this also attached in front of the flash head that controls how the light is thrown off. I have two sets of these -- a one- and a two-inch thick grid. The thicker the narrower the light output as you'll see in the next images. I will write up on this grid thing next time.

The green gel was chosen as the shoes has some green in it and I wanted the background to complement the subject. I used the living room area for this project. I was only able to produce two images for this project.

The image below used the green gel and the two-inch grid. Images are best viewed large and you can do that by clicking on the image.

Here's another image that I was able to create using the green gel and grid but this time6 with the one-inch thick but bigger.

During this project, I've learned that the power of the flash will determine the saturation of the color being thrown off by the flash unit.

I'd love to hear your comments that you can leave in the comment box below.

Now I need to "run" out of here. Cheers!