I've wanted to shoot some strawberries when I arrived here in the US as I believe there's a lot of good strawberries here. I have watched from some TV shows how large they are and having said that it would be easier to shoot them up close even without a macro lens.

So, earlier this week, when I went to the grocery to buy some stuff I also bought some strawberries. Here's a little comparison how large the strawberries were -- yes, it's in past tense as I have digested them all by now. 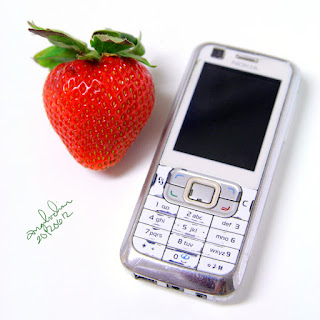 That's my old trusty Nokia 6120c which is about 10.5 cm (approx. 4.13 inches) in length. Now I guess we have an idea how large the largest strawberries were.

I don't have my usual lights to illuminate my subjects except for the overhead kitchen light. The light that it emits is warmer than I would like the light to be so I had to adjust some white balance during post processing.

Originally, this photo had a warm cast on it that it had a tint of yellow and orange. Fixing that was a breeze and delightful by going into GIMP and pulling up the levels menu and getting the white color dropper and pick the white color in the photo which was my cellphone or the kitchen counter top.

Anyway, aside from my little hurdle of lighting these strawberries, the only way I could light them is to position them the way I wanted the light to fall on them relative to the light source. Since I cannot move the light source and I have only a limited area to work with, I had to be very picky on how the strawberries were arranged. Moreover, I needed a little help on the lighting. Since I am lighting from above which I would have preferred a lower light source, I remembered the styro foam tray that I saved to act as a reflector. By the way the styro foam tray was from a pack of pork chops I bought at the grocery a couple of weeks ago. It wasn't large enough but somehow helped a little. You would see the effect of that on the right side of the cellphone where the shadows weren't that dark like the shadow cast of the strawberry. So I had to work that way for my other shots shown below:


For this shot, I was about level to the counter top. Still the styro tray on the right side of the photo/camera. This was shot was a little tricky as I didn't want much noise, I stayed on to my camera's finest ISO limit at 400. I wanted a just enough DOF so I picked f/3.2 though I could have gone upto f/2.8 but I think it would be too shallow. I'm glad that the lens has OS (Optical Stabilizer) which is similar to IS for Canon or VR to Nikon.

Here's another shot slightly at a higher angle than the photo above.

What I can see to improve this photo was to fill in that void of shadow in the middle with a strawberry. What do you think? 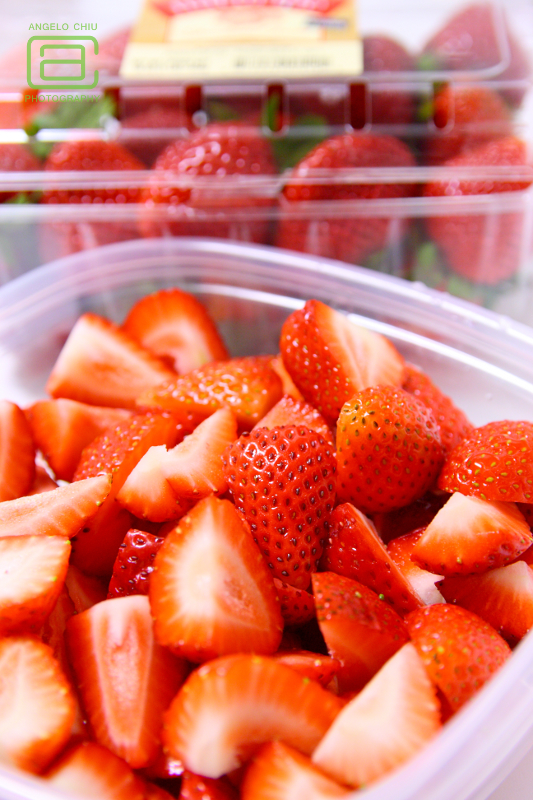 Here's what they have become after the raw photo shoot. I've washed and diced them for an easy eating time. I ate them for dessert after dinner, as a snack in the afternoon when I get from the office, and of course I ate them in the morning for breakfast with some bananas and cereals. That's for a healthy breakfast, right?

This shot was pure kitchen overhead light which was slightly behind me. Of course, white balance was tweaked a bit. Hope you have a strawberry delight as well as much I had a delightful days munching on them.