Recently, my wife's Chicken Buffalo has been a hit!

The first time I brought my wife's version of Chicken Buffalo in our office was during my birthday celebration. Actually, all the food that was prepared were given all a thumbs up but the Chicken Buffalo stood up from the rest and had repeat orders. 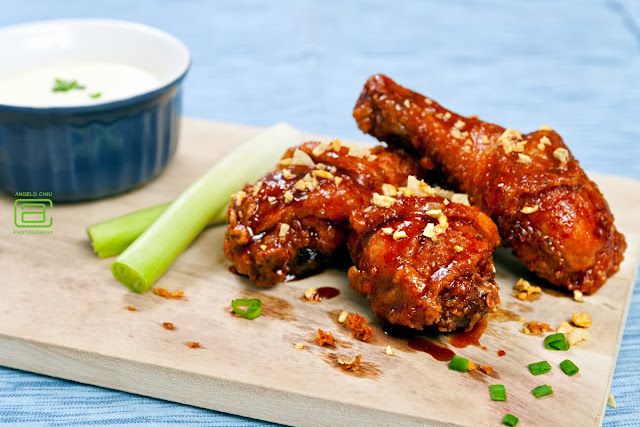 I have been longing to shoot these Chicken Buffalo and it's only now that I had the chance. It is an impromptu shoot and I squeezed those brain cells to recall all those tips on how to shoot food.

The above photo was the result of an impromptu shoot during one of the repeat order preparations. I had to do the (cramming) setup while the chicken are being prepared and cooked.

First, I searched for some inspiration on how to shoot these delicious Chicken Buffalo. Mostly I found images that are on a basket and white plates. I didn't have plain white plates nor those food baskets. So, I scoured around to replace those basket and white plates base and I found a wooden chopping board from my props box which I thought would work as a replacement.

I then looked for a container that would contain the sour cream sauce and my wife suggested these sort of cup that was white inside but blue on the outside. I then based the table lining on this container's color.

Now that I got the basic elements, I started laying down the table lining and positioning the wooden chopping board and started framing with the given space constraint. I then slowly added the main light which created a heavy shadow in the sauce container. I tried using a reflector to lift up the shadow but it wasn't enough thus I added another light to act as a fill light. Had to play around with some flash power settings to get the highlight and fill light combination just right.

After I got some sample shots of the position and lighting, I gradually added elements into the picture. I wanted to add celery but we didn't had one but luckily we had some leeks. I used the stalk part to act as celery. This green stuff will add contrast and color to the photo. For the garnishing, I chopped more of the leeks as a replacement for onion springs that was scattered and placed on the cream. I had to do what I had at hand. The fried garlic were part of the original garnishing so there was abundant of it.

So, after a couple of shots tweaking, adding, and adjusting more fill-light boards came out the result as shown above and below.

I adjusted the white balance and levels in post processing using GIMP.

Happy new year to all!
Posted by acphotos at Thursday, January 02, 2014