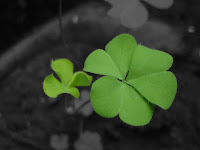 It looks refreshing.. Cool to the eyes.. Color of youth.. That would be green.

Did a little something on Photoshop after I took a photo of this clover with three leaves only... Wished it was four so I could have been lucky as one of the beliefs says that having a four-leaf clover is a lucky charm.

I guess I would be spending sometime on the lawn and look for these green stuff and hopefully I could also get some "green" on my hands for a macro lens. That would be really nice.
Posted by acphotos at Monday, April 20, 2009